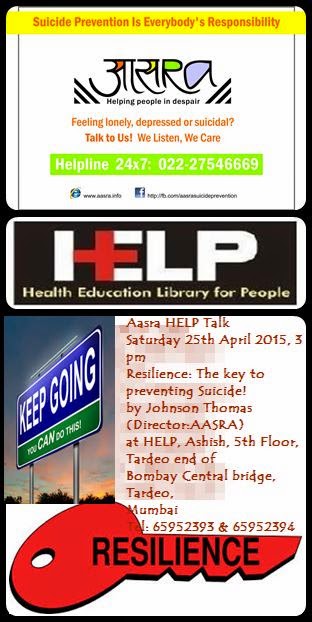 Posted by Johnson Thomas at 12:04 AM No comments:

Tarshi Blog-In Plainspeak- Article on Aasra helpline -FINDING HOPE AT THE OTHER END OF THE LINE: STORIES FROM AASRA’S HELPLINE FOR SUICIDE PREVENTION

FINDING HOPE AT THE OTHER END OF THE LINE: STORIES FROM AASRA’S HELPLINE FOR SUICIDE PREVENTION

I run an NGO called AASRA, a 24×7 crisis intervention center for the depressed and suicidal. Day in and day out we receive plenty of calls from people seeking unbiased support and caring for problems that they find difficult to deal with on their own. AASRA has enjoyed a successful run of 16 years, and during this time it has overcome many a crises of its own from finding suitable volunteers, to locating appropriate spaces for our operations and getting donors to help us FINANCIALLY

Johnson Thomas is a social worker, film-critic, journalist, writer, biographer, Suicide, Depression and Substance abuse Counsellor, Hypnotherapst, Soft-Skills trainer based in Mumbai. He is the founder/director of AASRA , an NGO working in the field of suicide & depression for the past 14 years, and the co-ordinator of the NGO forum of Navi Mumbai consisting of 70 NGOs working in diverse fields of social welfare. He has worked as a freelance journalist and film critic for the past 17 years, writing for various Indian publications.
Posted by Johnson Thomas at 3:26 AM No comments:

Email ThisBlogThis!Share to TwitterShare to FacebookShare to Pinterest
Labels: Tarshi Blog-In Plainspeak- Article on Aasra helpline -FINDING HOPE AT THE OTHER END OF THE LINE: STORIES FROM AASRA’S HELPLINE FOR SUICIDE PREVENTION #JohnsonThomas #AASRA #TrendingNow

Discover The Joy Of Giving Back With These 9 Mumbai-Based NGOs
By: Richa Jain on Mar 31st, 2015
32SHARES
“In this life we cannot do great things, we can only do small things with great love”, said the very humble Mother Teresa, for she knew that there is no joy better than the joy of giving. Does your heart, too, reach out to the ones in need and make you want to do your bit and give back to the society? Do you think that you alone cannot wage a war against a cause you are so dearly concerned about? Then fret not! These NGOs will be the answer to your doubts.

When you want to be the change you want to see in the world, these NGOs from Mumbai will let you beexactly that.
1. Smile Foundation

Image credit: Vawhelp
An innovative learning organization, the Smile Foundation set out to uplift and enrich the lives of the lesser-privileged children, their families and communities by providing quality education and spreading awareness about core subjects like health care, social rights and social behavior. Whether you want to contribute as an individual or an organization, as a volunteer or as a donor, Smile Foundation has all its doors open for all.

Image credit: Blogando Com Laila
Does any person who tosses a little chunk of garbage on the streets annoy you? Or does pollution make you worry about the Ozone layer? Does Global Warming remain a topic of concern for you? Then you probably might consider joining OASIS, Organization of Aware Saviours in Society, which works towards preserving the environment to best of their capacity. Join in as an individual or an organization and do your bit towards making this world a better place to live in.

Image credit: Me Copy Bird
“Touching the lives of 1.25 million needy elders, in your hand lies the power to change one more”, how powerful does this one sentence come across to you? This is what the folks at HelpAge India have to say to you. Join in the brigade and give your best to uplift the lives of the ones who are young at heart but not otherwise.

Image credit: Sneha Foundation
SNEHA Foundation is an NGO dedicated to working towards providing means for prevention of violence against women and children, child health and nutrition, maternal and newborn health and sexual reproductive health. If these are the issues that bother you as much as it does to the highly ambitious and courteous people working at SNEHA Foundation, then they are more than happy to welcome you for your skills, time, talent and experience through their Volunteer Program.

Image credit: Monroeccc
They are a fundraising NGO for other NGOs, helping them function more efficiently and thereby transforming lives of thousands of destitute people attached therewith. If you feel strongly about their initiatives, then you can join in as a volunteer or donate for any cause that you are attached to.

Image credit: Akanksha
The Akanksha Foundation aims to empower and transform the lives of thousands of children from necessitous backgrounds by equipping them with excellent education, imparting knowledge about social values and guiding them towards a brighter future. No matter what background you come from or what skills you possess, profess your love towards these wonderful kids by joining Akanksha and embark on a journey of immense satisfaction and bliss.

Image credit: Ads Of The World
What if you could save even one person from despair and darkness, giving them a new life altogether? The people at Aasra will exactly let you do that. Volunteer or donate, help in any way you can and save a devastated life by giving them new hopes and wings.

Image credit: Nanhi Kali
Founded by Mr. Anand Mahindra, Nanhi Kali thrives on the belief that educated girls will help hugely in eradication of social evils like dowry, over-population, domestic violence, child marriage and even serve as contributors to a growing economy. You can help either by sponsoring a girl child’s education or become a fundraiser or volunteer by giving your time and skills to the project.

Image credit: Nancy Jthorner
Human trafficking, where innumerable women and children are sent to unknown places and then forced into prostitution or child labour, is an issue which the Indian government is trying too hard to eradicate and for the same, Prerna Foundation has been of great help. They rescue the trapped women and children and then provide them with quality education so as to transform their lives. Join them and help put an end to this heinous crime!

Let’s resolve to change small things, if not the world. What drives you to make the world a better place? Share them with us in the comments section below!

0 0
Richa Jain
Richa is an incipient writer, always amused by the beauty of new and complicated words, a wishful Yogi and a traveller, can dance to the ringing of the phone, a happy Leo, consumed by books, enjoys the silence of late-nights, a social butterfly and loves anything that involves food. When unoccupied, you will find her doodling whimsical images on...   Read more
Posted by Johnson Thomas at 3:21 AM 4 comments: