Suicide of a world renowned Psychiatrist..

http://legalienate.blogspot.in/2010/06/psychiatrist-of-israeli-prime-minister.html
Anguished Suicide Note Cites ‘Deluge of Doublethink’ In Driving Kind-Hearted Shrink to DespairMichael K. Smith Legalienation News BureauMoshe Yatom, a prominent Israeli psychiatrist who successfully cured the most extreme forms of mental illness throughout a distinguished career, was found dead at his home in Tel Aviv yesterday from an apparent self-inflicted gunshot wound. A suicide note at his side explained that Israeli Prime Minister Benjamin Netanyahu, who has been his patient for the last nine years, had “sucked the life right out of me.”“I can’t take it anymore,” wrote Yatom. “Robbery is redemption, apartheid is freedom, peace activists are terrorists, murder is self-defense, piracy is legality, Palestinians are Jordanians, annexation is liberation, there’s no end to his contradictions. Freud promised rationality would reign in the instinctual passions, but he never met Bibi Netanyahu. This guy would say Gandhi invented brass knuckles.” Psychiatrists are familiar with the human tendency to massage the truth to avoid confronting emotionally troubling material, but Yatom was apparently stunned at what he called the “waterfall of lies” gushing from his most illustrious patient. His personal diary details the steady disintegration of his once invincible personality under the barrage of self-serving rationalizations put forth by Netanyahu.“I’m completely shocked,” said neighbor Yossi Bechor, whose family regularly vacationed with Yatom’s family. “Moshe was the epitome of the fully-integrated personality and had cured dozens of schizophrenics before beginning work on Bibi. There was no outward indication that his case was any different from the others.”But it was. Yatom grew increasingly depressed at his complete lack of progress in getting the Prime Minister to acknowledge reality, and he eventually suffered a series of strokes when attempting to grasp Netanyahu’s thinking, which he characterized in one diary entry as “a black hole of self-contradiction.”
The first of Yatom’s strokes occurred when Netanyahu offered his opinion that the 911 attacks on Washington and New York “were good.” The second followed a session in which Netanyahu insisted that Iran and Nazi Germany were identical. And the third occurred after the Prime Minister declared Iran’s nuclear energy program was a “flying gas chamber,” and that all Jews everywhere “lived permanently in Auschwitz.” Yatom’s efforts to calm Netanyahu’s hysteria were extremely taxing emotionally and routinely ended in failure. “The alibi is always the same with him,” complained another diary entry. “The Jews are on the verge of annihilation at the hands of the racist goyim and the only way to save the day is to carry out one final massacre.” Yatom was apparently working on converting his diary into a book about the Netanyahu case. Several chapters of an unfinished manuscript, entitled “Psychotic On Steroids,” were found in his study. The excerpt below offers a rare glimpse at the inner workings of a Prime Minister’s mind, at the same time as it reveals the daunting challenge Yatom faced in seeking to guide it to rationality:Monday, March 8“Bibi came by at three for his afternoon session. At four he refused to leave and claimed my house was actually his. Then he locked me in the basement overnight while he lavishly entertained his friends upstairs. When I tried to escape, he called me a terrorist and put me in shackles. I begged for mercy, but he said he could hardly grant it to someone who didn’t even exist.”-----Michael K. Smith is the author of "Portraits of Empire" and "The Madness of King George," from Common Courage Press. He can be reached at proheresy@yahoo.com
Posted by Johnson Thomas at 12:42 AM 1 comment:

Teenage suicides: Warning signs and how to deal with it- Article

Teenage suicides: Warning signs and how to deal with it 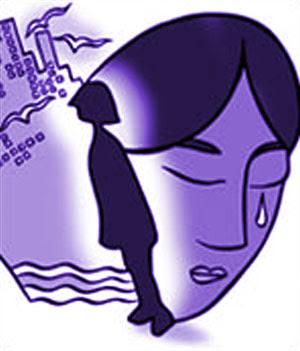 Posted by Johnson Thomas at 4:01 AM No comments:

As many as 1,35,445 people committed suicide in the country last year. Statistics released by the National Crime Records Bureau (NCRB) show that excluding West Bengal, 79,773 men and 40,715 women had taken the extreme step. West Bengal, where 14,957 suicides were reported, did not provide classification statistics to the NCRB.
The rate of suicide last year stands at 11.2 cases for a population of I lakh. As per rounded off figures provided by the NCRB, on an average, 15 suicides an hour or 371 suicides a day had taken place. When scrutinised further, it reveals 242 male and 129 female suicides a day.
Tamil Nadu tops the list with 16,927 suicides, followed by Maharashtra with 16,112 suicides, West Bengal 3rd and Andhra Pradesh following it with 14,328 suicides. The 28 States together accounted for 1,32,667 cases and the seven Union Territories together for 2,778 suicides. In the administrative division of Lakshadweep, only one person committed suicide. In Delhi UT, it was 1,899. Among the cities of the country, Chennai topped with 2,183 cases.
The rate of suicide at the administrative division of Puducherry was the highest in the country, 36.8 for every 1 lakh persons. With a population close to 15 lakh as per estimated mid-year population, 541 persons committed suicide in Puducherry in 2012. Sikkim follows with a rate of 29.1 per cent and Tamil Nadu 3rd with a rate of 24.9 closely followed by Kerala with 24.3. The national average stands at 11.2.
Family problems accounted for 84 suicides a day on an average. The NCRB figures show that social and economic causes have led most of the men to commit suicides whereas emotional and personal causes have mainly driven women to end their lives. The percentage of suicides by married men was 71.6% and married women 67.9%.
One suicide out of every six suicides was committed by a housewife. Andhra Pradesh, Karnataka, Kerala and Tamil Nadu plus Maharashtra have together accounted for 50.6% of the suicides reported in the country. The highest number of suicide pacts was reported from Rajasthan, 74, followed by Andhra Pradesh (18), Kerala (12), and Gujarat (3), out of 109 such cases reported.
Thirty-seven per cent of the victims took the extreme step by hanging themselves, 29.1 per cent by consuming poison and 8.4 per cent by self-immolation. Last year, 50,062 persons hanged themselves in the country and the majority were men at 34,631. The highest number of such cases was reported from Maharashtra, 7,055 followed by Kerala with 5,629 cases and Tamil Nadu 3rd with 5393 cases.
Nineteen thousand four hundred and forty five persons committed suicide by consuming poison and 12,286 of them were men. Tamil Nadu topped the list with 3,459 cases, followed by Karnataka with 3,173 cases. The number of self-immolation cases was 11,438, the majority being women — 7,326. In this category too, Tamil Nadu topped with 2,349 cases and 1,481 of them were women. Maharashtra followed with 1,674 such cases.
From among the cities, the highest number of self immolation cases was reported from Kanpur (285), followed by Chennai (282). By jumping in front of speeding vehicles, especially trains, 4,259 persons committed suicide and the majority of them were men (3,554). Andhra Pradesh topped this list with 1,101 cases.
As per NCRB statistics, 1,35,585 persons committed suicide in the country in 2011. NCRB statistics from 2002 shows that the annual suicide cases in the country always stood above the 1 lakh mark and the highest number of cases was in 2011. In 2002, it was 1,10,417 cases.
Keywords: India suicide rates, National Crime Records Bureau, NCRB suicide statistics, India suicide cases

Farm suicides rose sharply by almost 450 in Maharashtra in 2012 to touch 3,786, the latest National Crime Records Bureau data show. (The State saw 3,337 suicides in 2011). That is the worst annual increase in seven years. It also brings Maharashtra’s total tally since the NCRB began recording farm data in 1995 to a staggering 57,604 farmers’ suicides.
Andhra Pradesh also saw an upward surge. It logged 2,572 farm suicides in 2012. That is 366 higher than the previous year’s figure of 2,206. Karnataka and Madhya Pradesh reported declines of 225 and 154 respectively.
The last of the ‘Big 5’ States that account for over two-thirds of all farm suicides, Chhattisgarh, continued to declare a near zero figure. In 2012, it claimed it had just four. Chhattisgarh’s three-year average prior to its zero-declaration approach was 1,567. Indeed, the State’s own data, prior to that tactic, show it suffered 18,375 farm suicides between 2001-10.
Other States seem inspired by Chhattisgarh’s methods. West Bengal sent in no data at all on farm suicides (or some other categories, too) in 2012. But its three-year average for 2009-2011 was 951.
Chhattisgarh’s figure of ‘4’ and Bengal’s non-filing of data stand out in the all-India total of 13,754 farm suicides in 2012. If three-year averages for both States are included, then the national total would be 16,272. That would be the highest farm suicides figure in three years.
Even accepting the truncated numbers, the Big 5 accounted for over 68.4 per cent of all farm suicides in the country in 2012. That is the highest ever since the recording of such data began.
Among other major States, Kerala saw 1,081 such farm deaths, a steep increase of 251 over its 2011 number of 830. Uttar Pradesh saw 745 farm suicides — up by 100 over its 2011 figure. Tamil Nadu reported a decline of 124 to log 499. That’s down from 623 the previous year.
The NCRB figures across 18 years for which data exist show that at least 2,84,694 Indian farmers have taken their lives since 1995. (That is, accepting the non-figures of Chhattisgarh and West Bengal). Divide that 18 years into two halves and the trend is dismal. India saw 1,38,321 farm suicides between 1995 and 2003 at an annual average of 15,369.
For 2004-12, the number is 1,46,373, at a much higher annual average of 16,264. The figures in the second half occurred against a steep decline in the numbers of farmers in India and are hence even worse than they appear. (See The Hindu: Farmers’ suicide rates soar above the rest)
In short, there is no serious decline or reversal of the major trends in farm suicides in the country. ‘Zero’ declarations, though, are likely to grow by the year as more States feel the need to massage their dismal data or simply not file it.
(The copy has been corrected to show Tamil Nadu's declining figures as 124, not 123 and to correct the typo for Kerala's 2011 figure which should correctly read as 830 and not 1,830).
Keywords: Farmers suicide, farm suicides, National Crime Records Bureau, NC

Suicide by elderly on the rise: NCRB

inShare
Comments
More
A
A


BHUBANESWAR: Financial dependence, abuse, neglect by children and illness allegedly forced 500 senior citizens to commit suicide in 2013, according to National Crime Records Bureau (NCRB) data on Odisha. It was 351 in 2012."The NCRB findings are indeed disturbing. We have come across cases in which elderly people have committed suicide because of ill-treatment by children and other family members. Financial crunch and illness also forced them to take the extreme step," said president of All Odisha Federation of Senior Citizens' Association Krupasindhu Sahoo.The NCRB report is equally worrisome with regard to youths. A large number of people in 0-29 age group ended their lives due to unemployment, examination failure, failed love affairs and dowry disputes. Social and economic causes led most men to commit suicide while it was emotional and personal reasons in case of women.Last year, altogether 1,962 people in the age group of 0-29 committed suicide, while it was 1,983 in 2012. A total of 87 students, 49 male and 38 female, ended their lives for flunking examinations, the NCRB data said. Most of them were is Class X and Plus II.Failure in love led to 260 suicides (118 male and 142 female) in Odisha. Of the total 5,252 suicide cases reported last year, 3,272 were men. Among them, 2165 were married, the report added.
Posted by Johnson Thomas at 3:51 AM 1 comment: